Vitamin B12 is a compound essential to human health. If you’re not getting enough B12 there’s a strong chance you don’t feel as good as you could. Understanding the role b12 plays in our body, common forms in foods and supplements, and the associated health benefits can help you ensure optimal health.

Vitamin B12 describes several different types of cobalt-containing compounds. Together, these are known as cobalamins. Vitamin B12 helps our bodies produce new cells, protects and repairs nerves, and plays a critical role in early childhood brain development.

Vitamin B12 may be referred to as cobalamin, methylcobalamin, cyanocobalamin, adenosylcobalamin, hydroxocobalamin, or a handful of others. Cyanocobalamin is a synthetic form, not found naturally in the human body. Research suggests that supplementation with the bioidentical forms offers the best absorption (R). Oddly enough, the synthetic cyanocobalamin (bound with cyanide) seems to be the preferred form used in food fortification (R).

Methylcobalamin is often discussed as the superior form of B12 due to its “superior absorption.” There isn’t much research to describe which form of Vitamin B12 is best absorbed.

I’ve heard that Vitamin B12 is better absorbed orally, through liquids, sprays, or sublingual tablets (dissolved under the tongue.) This may be specifically true for those with genetic mutations or digestive conditions affecting cobalamin absorption. I haven’t seen convincing research to suggest the same can be said for the majority of people.

Vitamin B12 is absorbed through pathways very specific to cobalamin. It’s first broken down in the stomach, absorbed through the intestines, transported through the bloodstream, and absorbed into cells. Each step of this process involves cobalamin-specific compounds such as intrinsic factor, pepsin, or haptocorin. A hitch involving any such compound can cause poor b12 absorption. 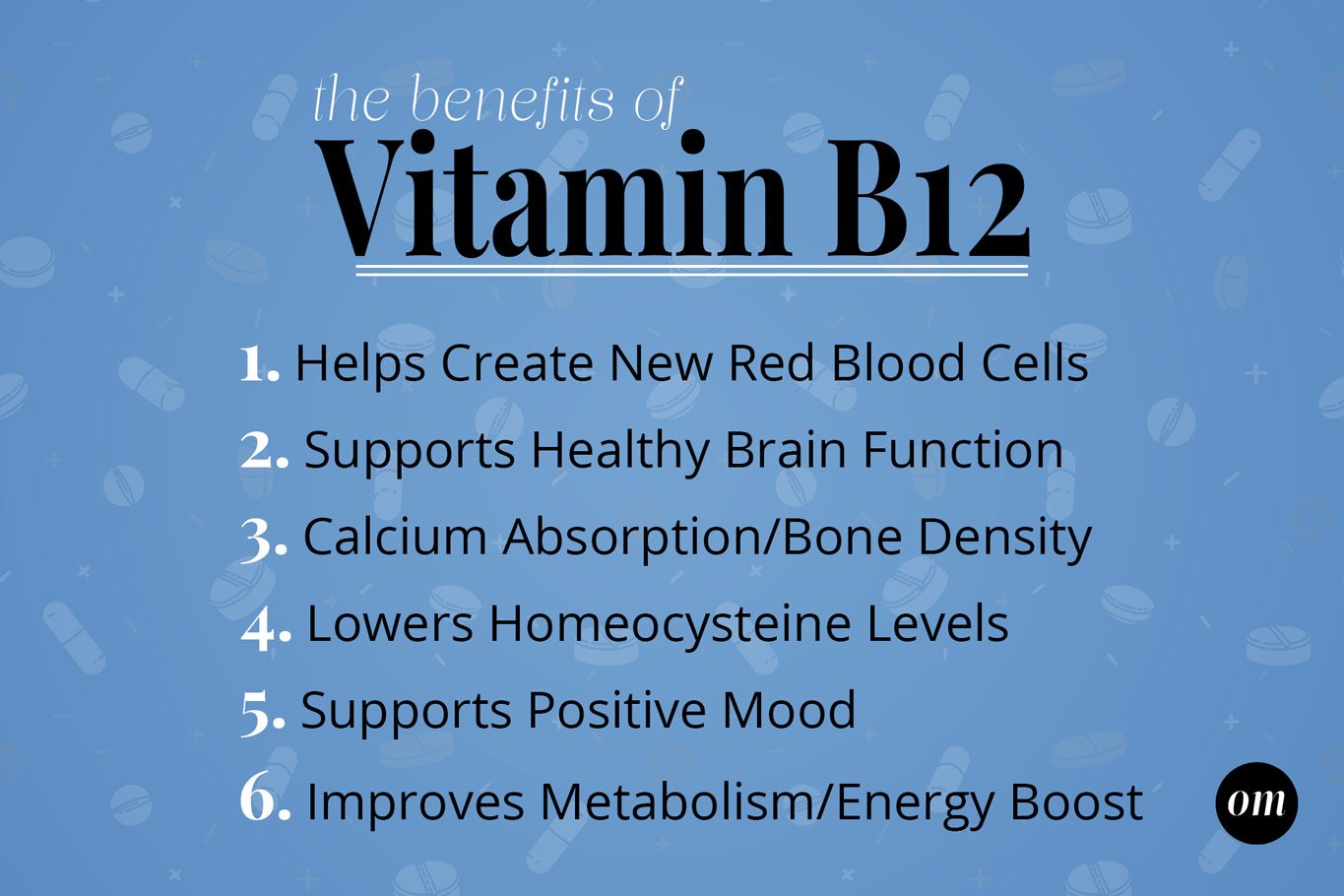 Vitamin B12 plays a critical role in many aspects of human health and essential to optimal health. B12 supplementation won’t guarantee any particular benefits but a deficiency is almost certain to negatively influence your health and wellbeing. Below are some of the benefits of Vitamin B12.

Vitamin B12 is essential to the formation of new red blood cells. B12 deficiency can cause red blood cells to improperly develop. This usually results in larger-than-normal red blood cells that are unable to move from the bone marrow into the bloodstream at an appropriate rate (R).

This is measured via the Mean Corpuscular Volume (MCV) test common to most blood panels. Higher MCV values indicate a larger average red blood cell size. This is one indicator used to diagnose vitamin b12 deficiency, among other health conditions such as certain infections, kidney disease, liver disease, or HIV.

Vitamin B12 plays a critical role in the development of our brains. Infants are particularly sensitive to b12 deficiency and low levels may result in stunted brain growth (R). Additionally, low b12 during early childhood has also been associated with higher risks of depression in adulthood (R).

Folate (folic acid, Vitamin B-9), often recommended during pregnancy, is also largely attributed to brain development and later-in-life cognitive function. Vitamin B12 is an essential co-factor in the production of tetrahydrofolate (activated folic acid). There is solid research showing the beneficial impact of folate supplementation and its impact on b12 levels during pregnancy (R)(R).

Many of the case studies I’ve read where emergency B12 therapy was required involved infants. These are cases typically involve infants who were fed b12-deficient diets (usually Vegan). In most cases, short-term IV therapy seems to fix things in a matter of months.

There is strong scientific evidence supporting the fact that Vitamin B12 deficiency is related to lower bone density (R)(R). Older people and women are at a particularly higher risk of bone-related illness.

Studies among these demographics have highlighted the paramount relationship between B12 levels and bone-related illnesses. Even with the amount of supportive evidence, the exact nature of Vitamin b12’s relationship to bone health is still unclear.

Leading theories hint at the issue being related to the formation of new bone-forming cells, known as osteoblasts (R).

Vitamin B12 has long been regarded as playing a pivotal role in metabolism and cellular energy production. It’s required for folate metabolism, methionine production, and ubiquinone synthesis (R). Recent research has only strengthened the case for B12’s role in metabolism.

Recent lab-based studies identified over 40 microbial proteins and enzymes that were B-12 dependant. This is far more than previously recognized and suggestive of B12 being heavily utilized by microbial communities.

Chronic B12 or folate deficiency has been associated with lower levels of energy and athletic performance (R). However, I’ve not seen overwhelming science to suggest that those having sufficient B12 would gain any particular energetic benefits from B12. That is; taking B12 might not give you an energy boost if you’ve already got enough.

The role Vitamin B12 plays in cardiovascular health is complicated. There is research that shows lower Vitamin B12 levels are related to a higher risk of certain vascular diseases (R).

On the other hand, there are several studies that conclude there is no direct relationship between Vitamin B12 deficiency and cardiovascular health (R)(R). To further complicate things, some argue that some reported lower-than-expected benefits of vegetarian diets for cardiovascular health may be explained by lower dietary b12 amounts (R).

It’s hard to pin down all the symptoms of Vitamin b12 deficiency since it’s used indirectly in many processes. Immediate symptoms are often characterized by tiredness and weakness while a chronic deficiency can cascade into immune dysfunction, memory impairment, and even neuropathy (R)(R)(R). Below are symptoms commonly attributed to b12 deficiency:

A 2015 paper published by the EFSA Panel on Dietetic Products considered 8 separate studies on Vitamin B12 ranging in dosages of 1.5-3.0 mcg/day. The average dosage is calculated as 2.2375 mcg/day (PDF).

This is slightly below the 2.4 mcg/day for men and women ages 18-50 recommended by the US-based Dietary Reference Intakes for Vitamin B12 (R). There is not a currently defined Tolerable Upper Limit for b12.

There is no Tolerable Upper Intake (UL) for vitamin b12 because it’s considered relatively safe in just about any dose. The RDA is 2.4mcg/day though I’ve seen (and taken) supplements containing 5000mcg per dose. I took one of those every day for a year and didn’t have any issues. My b12 levels came up quickly too!

B12 doses are all smiles and sunshine though. Research shows that b12 supplementation can negatively affect those with certain health conditions. Specifically, it can have negative effects on those with diabetic neuropathy (R).

Strangely enough, many of the cases of early-childhood b12 deficiency detail unfavorable reactions. When given b12, common symptoms of deficiency begin to resolve but unexplainable muscle twitching and spasms pop up. From the very limited number of case reports on the subject, it seems this issue resolves in a matter of weeks or months. In some cases, these spasms are reported as being severe enough to warrant anti-convulsant medication (R).

For anyone that wants a deep dive into Vitamin B12 I recommend reading the Following Publication:

That publication covers the research and data used to establish the RDA, EAR, and AI amounts for Vitamin B12. Those are the numbers many doctors and/or nutritional professionals are going to reference.

There’s no doubt that Vitamin B12 is one of the most essential compounds for sustaining optimal health. Whether your body is producing energy, churning out new blood cells, or working your brain overtime—B12 plays an important role. I suggest reading our Buyer’s Guide for Supplements as well as List of Best Supplement Brands if you are considering taking a Vitamin B12 supplement. Between those two resources, you should be able to get a good handle on how to find a good brand as well as some personal recomendations.

Vitamins and Nutritional Therapies: Understanding the Basics for Optimal Health

Vitamin & Supplement Buyer’s Guide: How to Find Products & Brands You Can Trust