Cannabidiol (CBD) is one of many active cannabinoids found in the Cannabis sativa plant. It’s sold as a herbal extract in many health food and supplement stores though its legal status is up in the air. Scientists have demonstrated many CBD oil benefits for human health though more research is needed before anything conclusive can be said.

The exception seems to be in cases of certain types of drug-resistant epilepsy, particularly early childhood cases. CBD Oil has shown the ability to greatly reduce the number of daily seizures—sometimes eliminating them altogether. The United States’ CBD oil market is growing fast. If you’re considering CBD it will behoove you to know what doses to take, potential side effects, and maintain reasonable expectations.

CBD Oil is a prepared Cannabidiol extract from the Cannabis sativa plant—marijuana for us laypeople—that has demonstrated some remarkable health benefits. The FDA has currently approved a single named Epidiolex for the treatment of certain seizure related health conditions. The legal status of CBD Oil is murky at best, with the FDA not granting cannabidiol GRAS Status.

Nonetheless, the questionable legality of CBD oil hasn’t stopped merchants across the nation from stocking up of CBD oil products. Cannabidiol is being billed as an effective natural treatment for conditions ranging from seizures, depression, and age-related brain issues all the way to cancer, heart attacks, and major digestive issues like Chron’s Disease.

Before you go cold-turkey on your cancer medication in favor of CDB oil lets consider some scientific research. By most accounts I’ve read, CBD acts on the human body through interaction with the endocannabinoid system. It’s thought that all the direct health benefits of CBD oil are attributable through action on the endocannabinoid via the CB1 and CB2 receptors.

A handful of human studies have shown stimulating the endocannabinoid system offers pain relief in a range of circumstances (R). Unfortunately, many of these studies aren’t specific to cannabidiol and use THC-containing compounds or THC derived compounds. It’s likely CBD would act in a similar fashion but comparing these THC studies to CBD isn’t apples-to-apples, so to speak.

One study demonstrated that mice were much more sensitive to temperature-related pain when given a compound that blocked endocannabinoid receptors (R). It’s worth noting this was measured through a muscle-specific activity which further highlights the endocannabinoid system’s role in healthy muscle function.

Another animal study demonstrated that a reduction in pain avoidant behavior was caused by cannabinoid compounds (R). As illustrated by the graph above, a dose of 75 mcg/kg range (roughly 5 mg for a 150-pound adult) eliminated pain avoidance almost entirely. Higher doses caused unwanted side effects such as severe fatigue and coordination issues. In other words, couch potato syndrome.

Sativex is a pharmaceutical combination of THC and CBD that has been approved in some areas of the world for the treatment of pain related to multiple sclerosis (R). Again, not CBD-specific support but a step in the right direction. Much of what we know of how THC and other non-CBD cannabinoids impact human health come from studies such as these.

In addition to Sativex, Marinol, Cannador, and Nabilone have demonstrated significant pain-relieving action in the following circumstances (R): 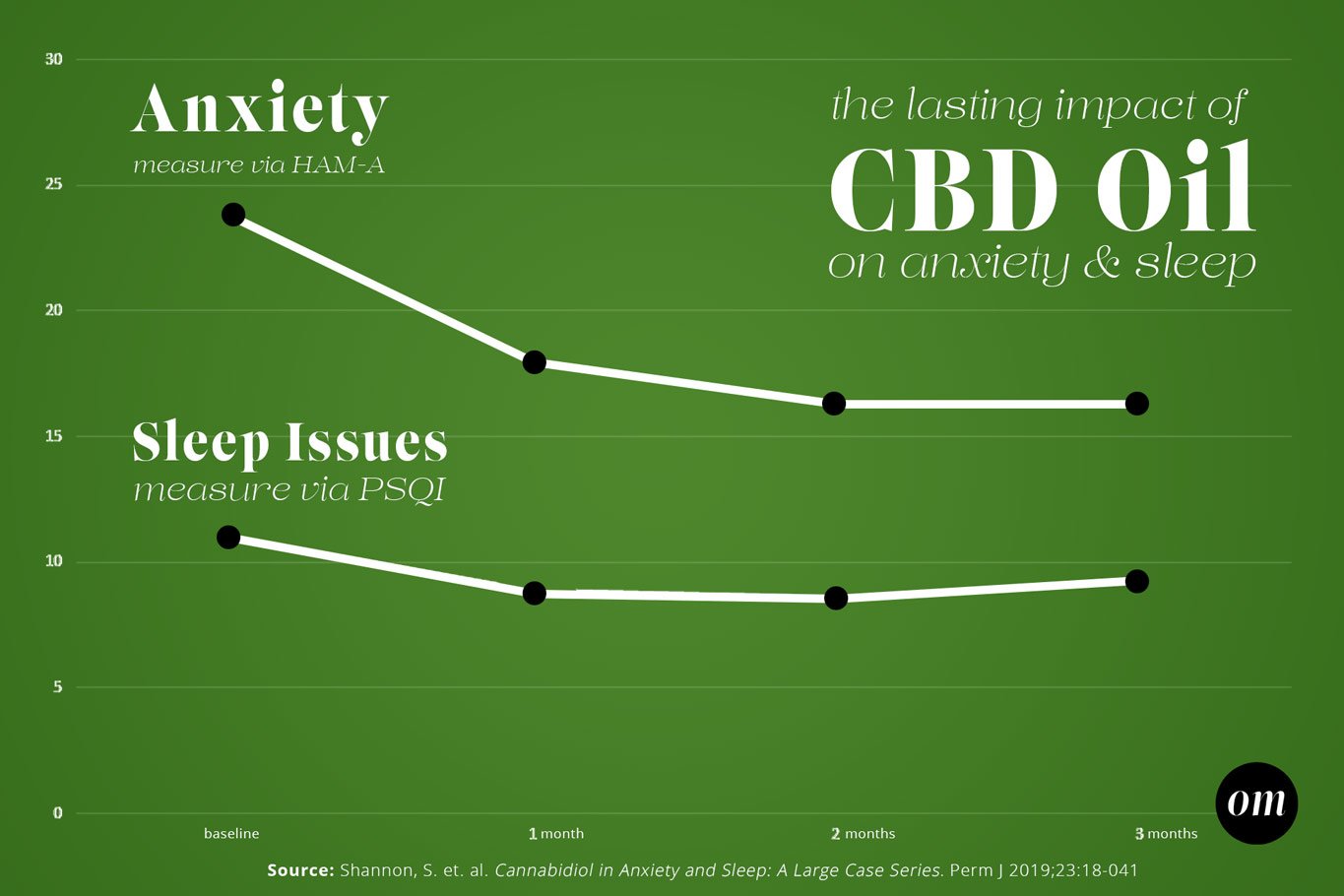 CBD Oil has been investigated as an anti-anxiety therapy as well as a potential treatment for depression and sleep-related health conditions. As widespread and affective as depression and anxiety are, the underlying causes of each aren’t well understood. Given the research I’ve read, I believe there’s a general consensus that the two often overlap and effective treatments for one are likely to shown potential in treating the other.

One studied, illustrated by the infographic above, investigated the impact of CBD oil on sleep quality, anxiety, and depression among 72 adults (R). This study found the majority of subjects saw significant improvements in all three categories with improvements being retained up to three months after the start of CBD treatment.

In one comprehensive review of animal studies, researchers concluded that CBD oil is effective in reducing anxiety related to the following disorders while having little to no issues with increasing anxiety (R): 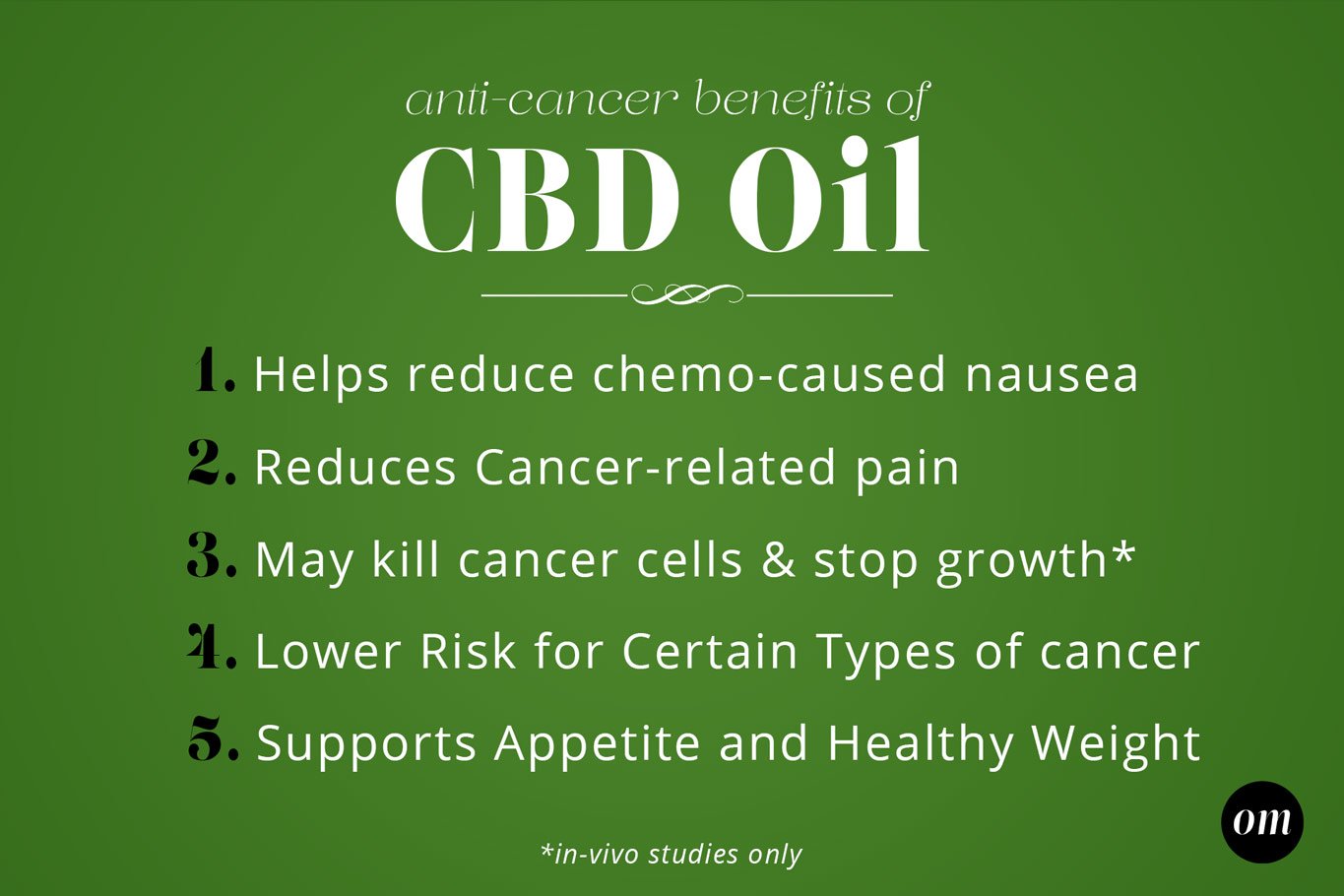 Several cannabinoids have demonstrated the anti-cancer activity by inhibiting tumor growth, causing the death of existing tumor cells, and preventing metastasization (R). Currently, there is no cannabidiol (or any cannabinoid) therapy approved by the FDA for the treatment of Cancer.

One study investigating the association of tobacco use, cannabis use, and bladder cancer found that among more than 84,000 surveyed participants, those that smoked cannabis—but not tobacco—had a 45% lower risk for bladder cancer (R).

One study split 177 patients with cancer-related pain into three groups: placebo, THC treatment, and THC + CBD treatment. The THC + CBD combination produced a significant reduction in pain while THC alone did not (R). The patients in this study suffered from pain not relieved by opioids which is yet another vote of confidence in my opinion for the importance of furthering research on CBD.

CBD has shown promise in killing certain types of breast cancer cells in the laboratory and animal testing (R)(R). These studies aren’t revolutionizing the field of cancer therapy but are helping pave the way to less harmful and more affordable treatment options.

On a related note, several other studies have shown that overexpression, upregulation, and otherwise abnormal activity of Cannabinoid Receptors CB1 and CB2 are often seen in cancer patients (R). This has no bearing on the potential of CBD to treat any of these cancers but illustrates the role of the endocannabinoid system in human cancer. 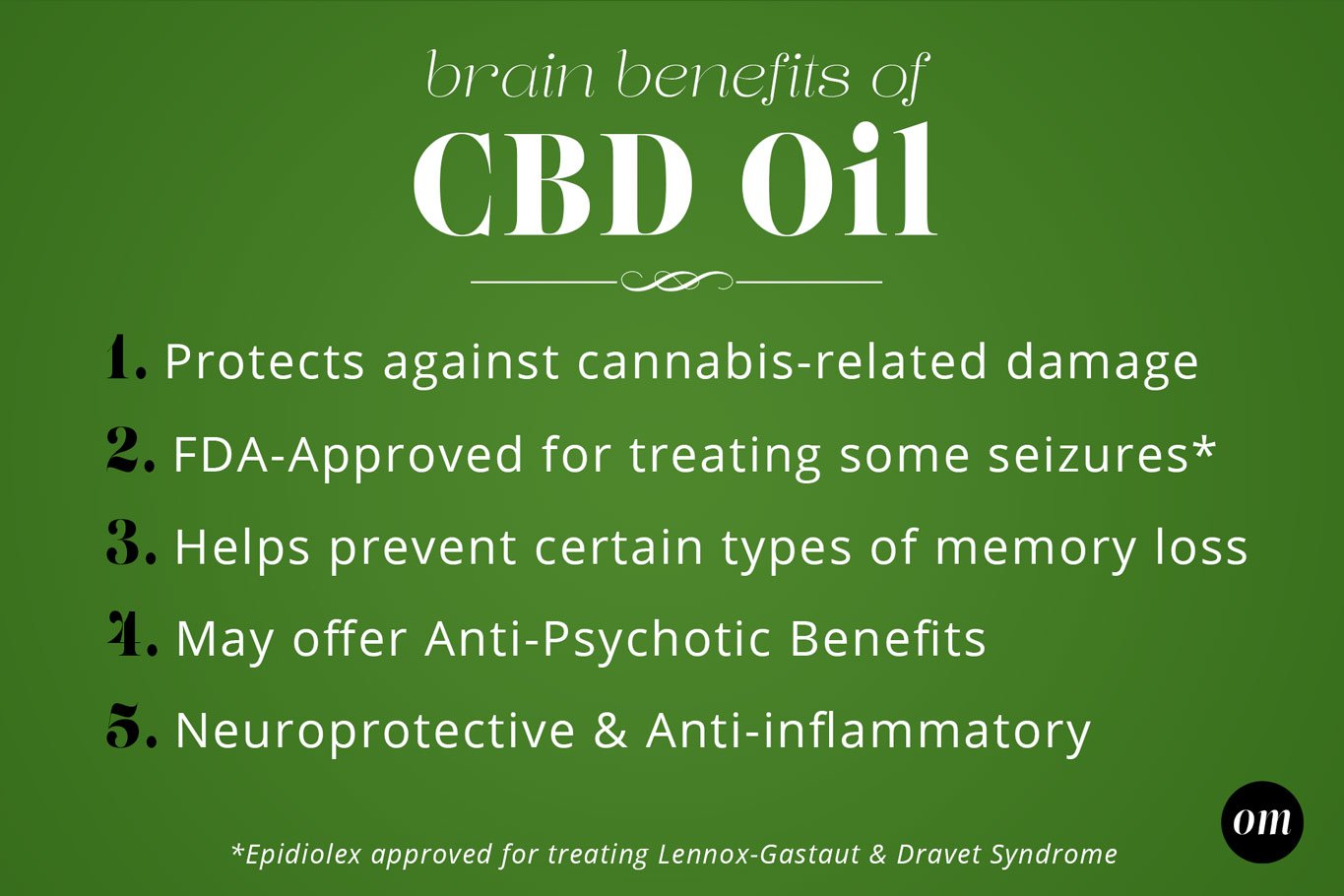 CBD Oil’s most scientifically-supported health claim is for the treatment of certain types of seizures. The FDA’s approval of Epidiolex reflects this—however complicating that approval status might have been to the legal status of CBD oil products. In the United States, Epidiolex—an orally administered cannabidiol drug—has been approved to treat the following two medical conditions:

A large concentration of CB1 receptors is found in areas of the brain attributed to memory, emotion, pain, and movement (R). A study of 18 regular cannabis users observed CBD’s ability to help protect the brain against the harmful effects of cannabis use, including memory impairment. They found that CBD acted on the brain in a restorative manner. Researchers concluded with their opinion that CBD may be a valuable future treatment for certain brain-related conditions such as Schizophrenia, Alzheimer’s, and Depression (R).

Animal studies have shown that treatment with CBD significantly lowered the amount of damage to brain tissue following states of low blood flow characteristic of stroke (cerebral infarction) (R). It’s believed this action is made possible by interaction with serotonin receptors.

Animal studies have shown that chronic acute CBD oil can help boost the energy efficiency of brain cells (R). This was noted in doses ranged from 15mg/kg to 60mg/kg tested in a single heroic dose or multiple, smaller, doses spread throughout the day. For reference, a 60mg/kg dose is roughly 4,000 mg per daily for a 150-pound person. A damn high dosage in my opinion and more than 500% higher than the average clinical dosage in the studies considered below (see dosage section below).

CB2 receptors and, to a lesser extent, CB1 receptors have been observed to help modulate the immune system in various ways. Relatively high concentrations of CB2 receptors are found on immune cells and help control the release of immune-related compounds (R).

In animal studies, CBD and THC have both demonstrated the ability to help lower markers of inflammation following an immune response (R). This could help reduce the severity of symptoms associated with many illnesses ranging from the common cold to cancer.

Certain immune cells are “programmed” to attack things like bad bacteria or viral infections. Autoimmune disorders are characterized by these cells attacking healthy tissues or otherwise acting in unfavorable ways. As the body continues to make more T-cells that respond unfavorably, autoimmune-related symptoms may worsen. In animal studies, CBD has shown the ability to help disrupt this process in ways that might help address autoimmune disorders (R)(R).

Research specific to cannabidiol’s positive effects on human health is sparse. It’s a developing field, and I believe there are existing breakthroughs on the near-horizon. The direction of future research, as well as personal experimentation, may benefit from taking stock of existing research outlining the benefits of endocannabinoid system activation. Pure speculation of course, but I believe it to have a thread of sanity.

Research supporting the use of CBD oil to treat these conditions does not currently exist. These are in many cases, results from adjunct therapies of non-CBD compounds. I still believe they can serve as valuable points of reference to better identify potential future therapies of cannabinoid-focused treatments.

Some US States where recreational marijuana has been legalized have seen reversals in the rate of opioid-related deaths (R). All pretty speculative at this point, but these two characteristics of CBD-containing compounds sound like they have the potential to help move away from high-risk pain medications. 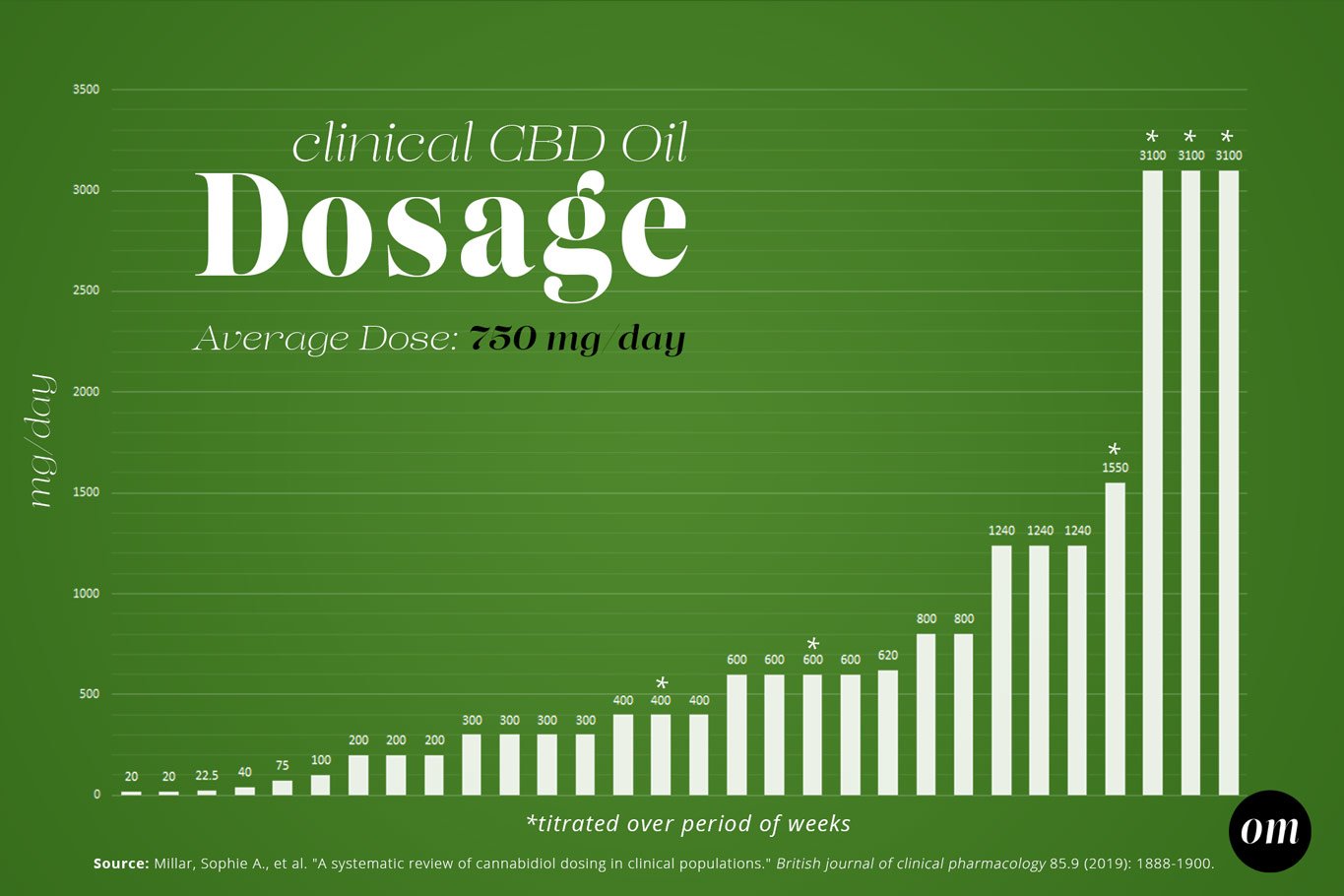 The ideal dose for CBD isn’t yet established. I’m of the opinion there isn’t currently sufficient evidence to know the long-term effects of CBD, let alone establish an agreed-upon safe dosage. The purpose of CBD use is also a powerful variable when considering dose. CBD oil dosages for sleep aren’t likely to be sufficient for someone taking CBD oil for seizures.

In the infographic above, you can see the dose from 30 separate human CBD studies. In some cases, multiple doses are from different groups in the same study. Doses ranged from 20mg/day up to 3,100mg/day, with an average dose of around 750mg/day for adults. Many doses, including all the highest doses, were titrated from much lower starting doses.

Note: Dropping the three highest doses in the above data would bring the average down near the 500mg/day mark.

Research suggests that long-term daily doses as high as 1500 mg are well-tolerated. However, some studies suggest that long-term high dosage usage of CBD oil can lead to some unwanted side effects including the following (R):

A 2019 animal study received a lot of attention after concluding CBD Oil could cause liver damage and may cause unwanted drug interactions (R). While these effects were observed, the dosages given to the rats fall into the category I call “heroic.” For example, the “acute toxicity” dose was as high as 2,460 mg/kg —roughly 165,000 mg for a person that weighs 150-pounds!

First and foremost—CBD Oil doesn’t have scientific support for half the health claims I hear being attributed to it. I first heard of CBD oil years ago when children with drug-resistant seizures were finding miraculous results. It took nearly 20 years before CBD gained FDA approval for the treatment of certain types of seizures.

That’s 20 years someone would have suffered waiting on a seal of approval from the FDA.

I believe it’s important to pay attention to the development of CBD-related science and manage one’s expectations when using CBD-related therapies. I also believe CBD oil is natural, relatively safe, and worth a try for anyone currently considering it.

I’d also urge you to talk to your doctor about it first as well. Personally, the last three doctors I’ve worked with recommended it on my first visit.